The Bandhavgarh National Park is home to more than 75 tigers which are the major attraction to the region. The park has a massive 1,536 sq. km. area, which is divided into a core zone (716 sq. km) and a buffer zone (820 sq. km.). These zones serve as home to around 37 species of mammals, several species of reptiles, birds (250 species) and butterflies (80 species). It is no wonder that the park is a nature lover and wildlife photographers’ delight. Apart from tigers, you can also spot wild elephants, leopards, sloth bears, spotted deer, macaques etc. during your jeep safari.

The safari zones, both core and buffer zones are divided into different routes. Usually, the tourists undertaking the safari are allotted two routes, one for entering the forest and the other for exiting it. This ensures that the visitors can see the natural beauty of the region. To increase your chances of spotting wildlife in their natural surroundings, you need to know about the best safari zones of Bandhavgarh National Park.

The core zone of the Bandhavgarh national park is the central part of the forest where no human habitation is allowed. This part of the forest area is permitted with limited tourism activity and a ban exists on extracting any forest produce. The major aim of these restrictions is to prevent poaching and deforestation to allow animals as natural a habitat as possible. The core zone shares its boundaries with the buffer zone. It is divided into three zones, namely: 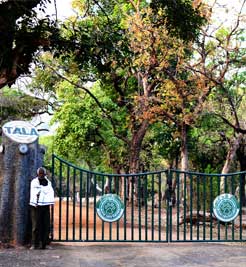 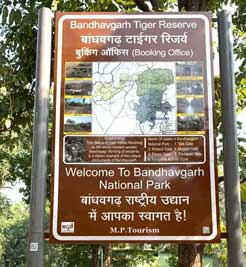 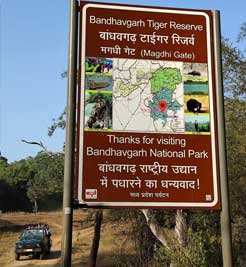 1. Tala Zone – It is one of the oldest and most popular zones of Bandhavgarh National Park. Apart from tiger sightings, the zone is also known for its several other attractions. These include the famous Bandhavgarh Fort and the 10th-century tourist attraction the Shesh Shaiya, the idol of Lord Vishnu lying on the Shesh Nag. The idol is also the origin of Charan Ganga which provides life to the park and its various meadows. The Charan Ganga river originates from the foot of Lord Vishnu and hence the name. Another attraction of the zone is the 10th century Bari Gufa. The most popular meadows of the zone are Rajbhera and Chakradhara where exceptional sightings of wild animals are reported. Bamania Hill, Three Cave Point, Sita Mandap, Gopalpur Pond, Ketkiha etc. are other attractions of the zone. The region is replete with Sal forests, grasslands and hillocks. Umaria is the nearest town (32 km) from the Tala zone.

2. Magadhi Zone – The zone is also known as Gate 2 of Bandhavgarh National Park. It has several natural and manmade waterholes including Murdhawa, Dabhadhole, Sukhi Patiha and Charkpwaha where tiger sightings have been reported. This zone is characterized by mixed dense forests and grasslands. Apart from wildlife, the zone is also famous for other attractions including Charger Point, Mahaman Pond, Climber’s Point, Sookhi Taalab, Sookhi Dam, Dinosaur Rock, Sehra Dadra, etc. The zone is located at the fringe of the park and can be reached from Umaria easily as it is merely 38 km from the place.

3. Khitauli Zone – This zone is known as Gate 3 of the Bandhavgarh National Park. The forest area has dry-deciduous forests and several tiger sightings have been reported in the past few years. The zone is also home to a herd of migrant wild elephants. Apart from tigers, other animals that can be spotted here include nilgai, chinkara and chausingha. Apart from animals, the zone is emerging as a favorite for birdwatchers. The other attractions of the zone include the Umrar river, Garhpuri dam, Nilgai Nala, Kumbhi Kachhar, Charkhi Dongri, Marjadgarh tower and Tedka Munara. From Umaria, Khitaul is merely 37 km and can be easily reached by cabs or private vehicles.

The buffer zone adjoins or surrounds the core zone of Bandhavgarh National Park. It serves as a barrier between the forest with its wildlife and the human inhabitants of the neighbouring villages. This part of the forest is open to regulated activities including, but not restricted to, human habitation. Though the density of wildlife is less in the buffer zone compared to the core zone, the advantage of it being open for tourists throughout the year has its advantages. With permission for a night safari (7-9.30 PM) in the zone, tourists can enjoy the activities of nocturnal animals. The zone has abundant fauna including chinkara, nilgai, wolf and four-horned antelope. It is divided into three zones, namely:

1. Dhamokar Zone – 14 km from the Tala Zone, this buffer zone is an extension of the Magadhi Zone and lies between Parasi and Mahaman villages. The Mudgudi dam and a few natural caves of Sehimaada are the major attractions of the zone. The Kadewaha grassland is ideal for spotting wildlife in the zone.

2. Johila (Kalwa) Zone – An extension of the Tala zone, the entry point to this zone lies near the Chechpur village. The Johila waterfalls located in this zone attract several tourists during the safari. The waterfall originates from Amarkantak and drains in the Son River. The other attractions of the zone include Kuthulia waterfall, Badia Ghaat, Chindia Ghaat, Zurnar Ghaat etc.

3. Panpatha (Pachpedi) Zone – The extension of Khitauli zone is 25 km from Tala village. The attractions of the zone include nilgai, wild dogs, chinkara and chausingha. Deciduous trees and bamboo trees cover the entire region. The zone has a beautiful scenic spot where a stream flows, attracting several animals to the area. The entry to this zone is closest to Umaria (55 km) with Katni being the second nearest town (63 km).

Despite the park being divided into different zones, the entire region is essentially one big forest. As a result, there is no guarantee that tiger sightings will occur in which zone. If you wish to increase your chances, it is important to check the sighting index of the past few days in the region before booking your safari. Moreover, undertaking several safaris also increases your odds of spotting the wildlife, especially tigers.